SkyFi, our patent-pending WiFi-to-Serial adapter, is the only WiFi device on the market specifically designed for telescope control.

SkyFi is battery-powered for field use, and comes with a built-in rechargeable battery with up to 12 hours of life under continuous use.

SkyFi requires no pairing, and no special drivers. It uses standard TCP/IP networking protocols and enables your telescope to be remotely controlled over the internet. 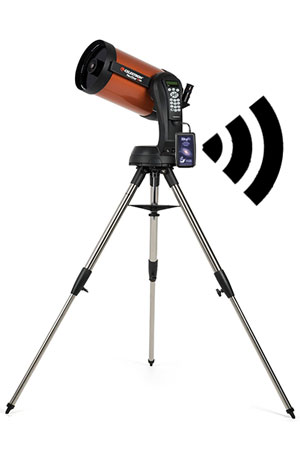 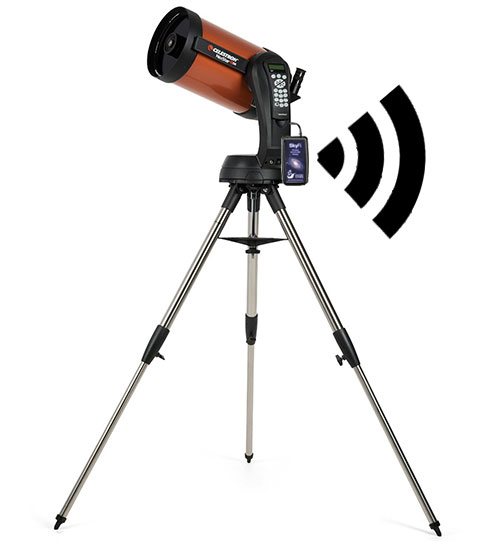 SkyFi can wirelessly enable almost any Go-To telescope with a standard USB or RS-232 serial interface. All you need is the rs232 cable supplied by the manufacturer.

SkyFi is very compact, barely larger than an iPhone. It can be easily attached to your telescope's mount or tripod; a velcro loop is included for that purpose.

SkySafari Plus and Pro apps, for iOS, Android and macOS, are specifically designed to communicate with SkyFi and your telescope over a wireless TCP/IP connection.

SkyFi III is our WiFi-to-Serial adapter, designed for wireless telescope control. If you have a computer-controlled GoTo telescope, SkyFi III can use the WiFi capabilities built into your computer and your iOS or Android device to point your telescope in the sky. SkyFi III is the only WiFi device on the market specifically designed for telescope control, and it now includes a built-in rechargeable lithium ion battery for up to 12 hours of field use!

SkyFi III includes both USB and serial ports - this means that it can control the latest USB-only telescopes from Meade as well as other telescopes with RS-232 serial interfaces. SkyFi III is very compact, barely larger than an iPhone. It can be easily attached to your telescope's mount or tripod; a Velcro belt is included for that purpose.

SkyFi III has a micro USB connector for external power. It can be powered or charged from a standard 5V USB port on your computer. The package includes a micro USB power adapter (North American orders only) that accepts worldwide AC current (100-240V, 50-60 Hz). You can also power SkyFi III from a car battery using a "cigarette lighter" micro USB adapter (not included).

Once powered on, SkyFi III creates its own 802.11 wireless network. By default, this is an open wireless network called "SkyFi", but you can rename and secure it later on. Join this network from your mobile device, laptop, or other computer, and - voila! - you're ready to use SkyFi III. As long as your computer or mobile device gets its IP address by DHCP, no additional network configuration is required.

Use your existing telescope serial cable and plug directly into SkyFi III - you don't need to buy (or build!) another. If you don't already have one for your telescope, see here for our selection.

Finally, you'll also need a telescope control application running on your computer or mobile device. SkyFi III works seamlessly with our SkySafari apps for iOS and Android devices, our SkySafari software running on macOS, and our Starry Night software on Mac and via Virtual Serial Port on Windows.

Get the SkyFi 3 QuickStart Guide here

Please update the firmware in your SkyFi III. The latest firmware (1.3.4) can be downloaded here

SkyFi III can wirelessly enable almost any telescope with a standard USB or RS-232 serial interface. All Models that are expected to work are listed below, but models that have not as yet been tested and confirmed to work with SkyFi III are marked with a double asterisk ** If you confirm any of these models please let us know.

The baseline requirement for Celestron support in SkySafari 4/5 is Celestron firmware version 4.0 or higher, which is basically everything sold since 2008. This excludes the older Nexstar GT series, the original Celestron Nexstar series and the Celestron Ultima 2000. Note, the GT hand controllers can possibily be replaced with newer versions that will then work with SkySafari 4/5. Consult a Celestron dealer for more information

Some Meade ETX models (60/80) ship with the Autostar #494 controller. To make SkyFi III work with these scopes, you need to replace the #494 Autostar controller (which does not have a serial port) with the #497 Autostar (which does). Contact Meade to upgrade your controller.

The only models that do not work with SkyFi III are those that have neither USB nor RS-232 serial ports. Such models include:

The Vixen StarBook controller uses an ethernet interface, which is also physically incompatible with SkyFi III. However, you can use an Apple AirPort Express (or other wireless router) to control the StarBook from our SkySafari iPhone app. This document from Vixen explains how. You also need to configure SkySafari to communicate with the StarBook controller at 169.254.1.1 on port 80.


Using SkyFi with Other Software

However, other astronomy programs like The Sky and Starry Night expect to communicate with a telescope directly over a serial port. To make SkyFi work with those programs, you'll need a virtual serial port driver - a piece of software that presents SkyFi's wireless TCP port to other programs as if it were a real serial port.

A number of third-party virtual serial port drivers are available, and many of them are free. Here are a few that we've successfully tested with SkyFi; all of these run on Windows:

David Snay of Astronomy Technology Today magazine has written a step-by-step guide to Connecting to a Telescope Through SkyFi via COM2TCP. You can download a PDF of Dave's guide by clicking this link.

Simulation Curriculum offers a 1-year limited warranty on all SkyFi III units purchased directly from us or an authorized reseller.